Origin of the Cobbers Shed

The concept for Rod’s Shed surfaced when the erection of the Lysaght Army Hut was nearing completion and it was apparent that most of those involved in this mammoth task, and who were accustomed to working on a saw horse outdoors , would now require an area in which to work on their own projects. They would be looking for a similar opportunity to continue practising their skills in the open air. 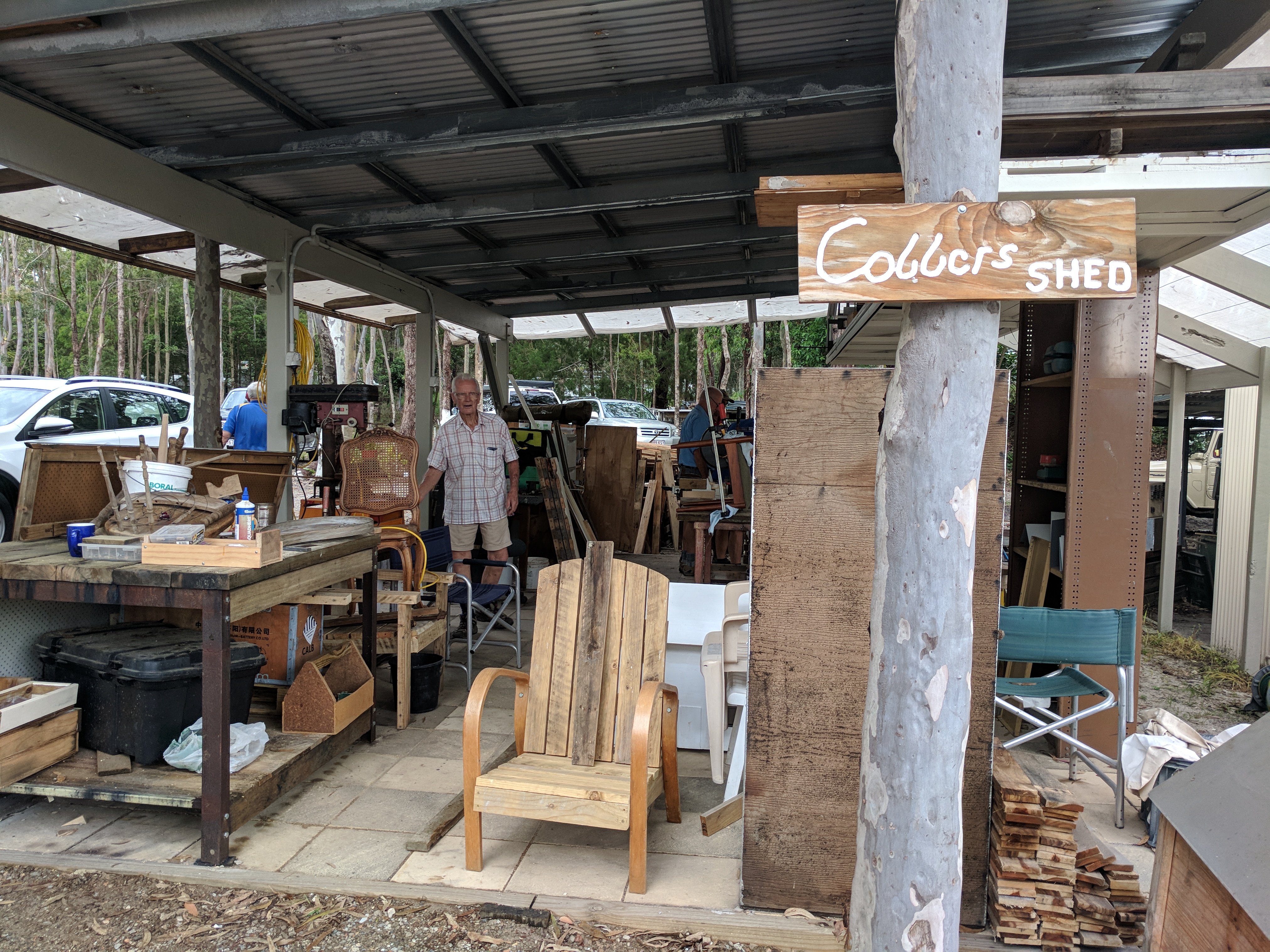 Knowing that The Shed had acquired an enormous amount of materials through donations, (or other members trying to downsize their backyard unwanted bits without having to incur a Tip Dump Fee), we were the suckers. Even though continual announcements were made by the executive for this practice to stop or cease, it still continues.

About 12 months ago we were contacted by the Noosa Council to participate in Recycling Week 2016. Council made a presentation of their aims to reduce the volume of waste going to landfill in the Noosa Shire and the Noosa Mens's Shed was invited to provide a working display one Saturday at Bunnings Noosaville. We went armed with old pallets, hand tools and power tools with the intention to show the general public, (about 3000 pass through Bunnings on a Saturday), how to utilise the pallet timber to make household items or toys for sustainable use.
Firstly, build your tools. Armed with a larger pallet and two smaller ones we assembled a work bench. A number of items which had already been made and painted supplemented our display and were available for sale. The work bench was left behind and the words drifted back to us that someone took a liking to it and took it away the following afternoon. With the power tools to hand, a number of pieces of timber were shaped, sawn, sanded and drilled with assembly holes enabling us to screw it together to produce wooden trugs. These are a wooden basket for collecting flowers and vegetables.

The Council then invited us to visit the Recycling Recovery Centre with the view to supplying the Shed with whatever timbers, pallets or iron we may require. A good working relationship now exists with the Noosa Council and we do our bit by reducing what goes into the pit. I might add that their supply of wood destined for chipping and landfill is larger than our Assembly Hall.

One requirement for accessing the Wood Mountain is to have to have completed an OH & S Induction and a select few have this requirement. Having seen what was available, we couldn't return quick enough to acquire all types and shapes of timber. It was all very well having access to a good supply of recycled timber but one back at the Men's Shed where were we going to work? We, (the Noosa Men's Shed), had acquired a three car carport from the Catholic Church. The roof trusses were snaffled for the roof of the Studio, leaving some bent steel columns and heavy timber headstocks.
A Drawing was created whereby the columns would be utilised with the timber beams. The columns would be fitted with steel base plates which would allow the columns to be bolted to a concrete foundation to give more than a satisfactory height structure above the ground.

The original concept was to have a floor of paved bricks which would save on a pour of readymix concrete. However, a member came forward with a quantity of 400 x 400 concrete pavers. The large gutters supplied with the Lysaght Hut became the Roof Trusses, some steel purlins were left over from another job, leaving only a few to buy and second hand roofing iron (complete with holes) was acquired to top off the roof. The master electricians have since delivered 240 volt power which enables those who now frequent this facility to ply their skills.

A potential member arrived one day, while we were building a park table beside the Hut, with a wagon full of power tools. These included an electric drill, pedestal drill, a support table with a router, a box full of router cutters and an assortment of other tools.

A number of months have now passed since this facility was completed and with full steam ahead, all types of products are being manufactured in what is now named The Cobber’s Shed.